With more than four years behind us since the game was announced, there is finally enough content to guess about the themes Soulstorm is going to explore. Considering the sporadic nature of these content drops and the inherent unsureness that reasoning about trailers possess, I’d preface this whole thing with a warning: While I’m trying my best to keep things consistent, I could be wrong about anything and everything, so keep the proverbial grain of salt handy.

Firstly, I’d like to address the probably least “controversial” point of this post, namely the journey Abe is going to take in Soulstorm. To recap, here is the new, official Oddworld map: 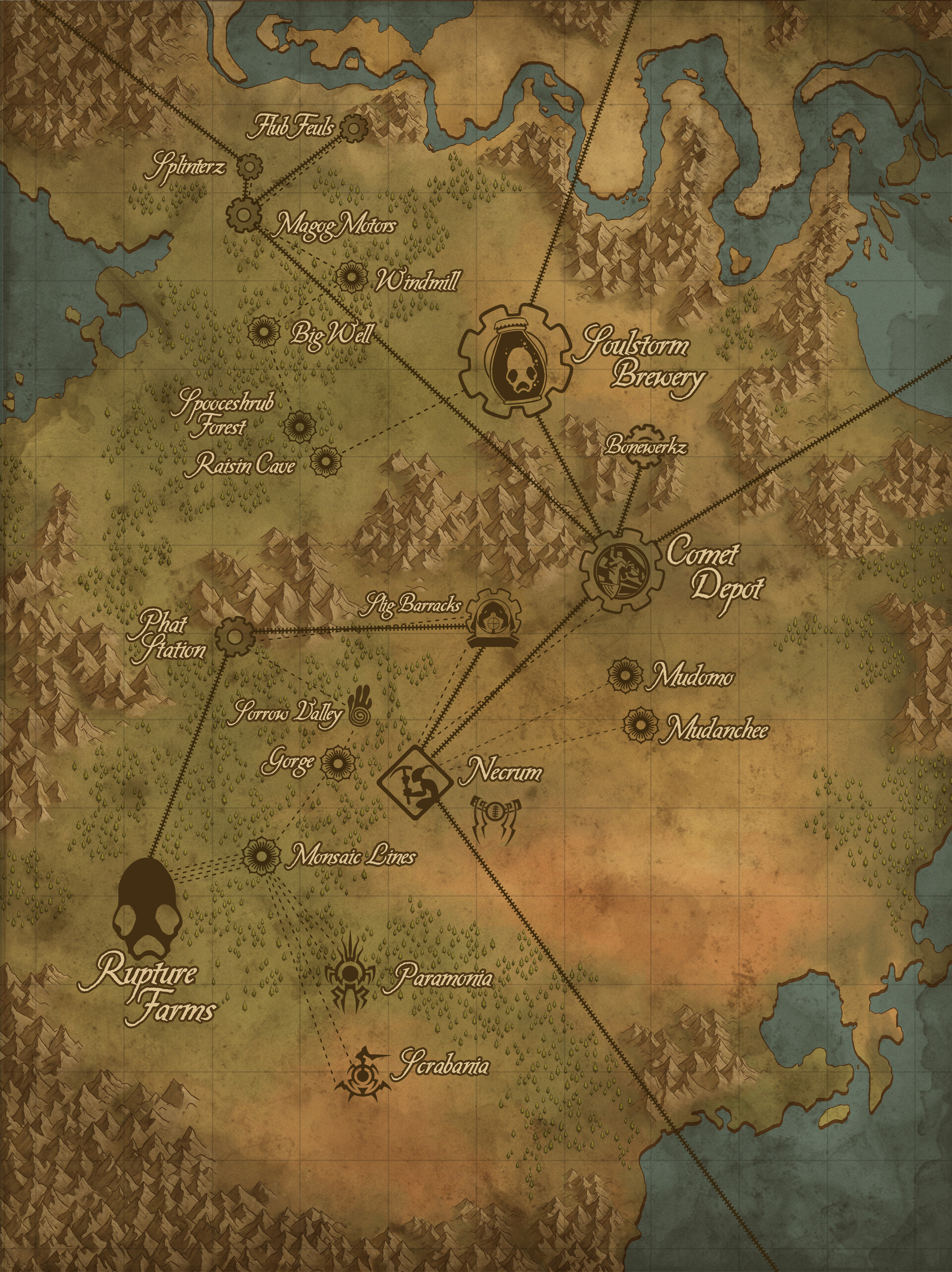 Lorne Lanning: “We start off in a hideout, with some more native environments. You escape that towering inferno. Then we go into old, abandoned towns that are a little more like Stranger, these old mill towns and mining towns. We have ancient ruins, pretty spooky-looking areas. We wind up at gas stations for trains, big fuel depots. Then we go to a Slig Barracks and the Necrum Mines, a mining factory that’s built on top of a graveyard, basically. They’re mining the bones. That’s the other secret ingredient in the Brew.”

Taking the this description into consideration, I am almost certain we will start in Monsaic Lines. It makes sense for multiple reasons: Not only does New ‘n’ Tasty end there (making Soulstorm a direct continuation like Exoddus was), but it fits the description Lorne Lanning gave almost perfectly.

With this in mind, I believe the path of progression will be something like this:

While the quote ends here, my personal interpretation of what will happen afterwards is the following:

There is some complication here, however, considering one of the early reviews said the following:

PCGamer: Most of the game will be linear, but eventually you’ll reach a giant train hub, at which point you’ll be able to choose from five locations to guide Abe in any order. And they’re all much bigger than the one I saw.

The “giant train station” is without a doubt Comet Depot. The problem is rather, with these five ‘much bigger’ locations. Originally I was going to say, the Brewery must be one of them, but such a central location surely isn’t something you can do out of order. Rather it’ll probably be at the climax. Unless of course, if you can go there, but you can’t finish the game until you’ve visited the other places too. Or perhaps you can, but to get the best ending you have to leave it last.

Putting the Brewery aside, one has to wonder: Will the locations from Munch’s Oddysee appear in Soulstorm? Looking at the map, Magog Motors is a direct connection to Comet and with them you’d finally have the five possibilities:

While it does sound like a stretch, I honestly have no better explanation and seeing how the Vykkers and Fuzzles are part of the game, I consider it entirely possible.

There is, however, one more elephant in the room: If we accept that the locations in MO will appear in Soulstorm, then that also means the four Native locations I have been conveniently ignoring until this point should also appear. I pretty much haven’t got a clue where they’d go in the storyline.

What do I mean by this scary combination of words? Well, there was one thought that couldn’t leave my mind while I was watching the new trailer: It felt like I’m watching an entirely different story than I did back in 2017.

If your memory is hazy, this is the video I mean:

I believe it’s safe to say that the narrative focus of this video was the horrors of SoulStorm Brew and the similarity of Magog facilities to concentration-camps. Also we see Glukkons and Vykkers doing what they do best (e.g. standing around being evil.)

The focus here is extremely different. Other than one of the new Glukkons face being plastered on one of the scenes, there isn’t a single mention of them and the Brew too is largely a secondary thing, next to Abe’s journey, which seems to be a lot more about leading the Mudokons.

This makes one wonder: What if the Brew isn’t even the important part of the story?

To elaborate, I’m not (necessarily) saying that the Brew is a bait-and-switch, but that rather it being the plot device, it’s just one of multiple. In fact, I believe the story’s main McGuffin will be the shiny object embedded in Abe’s backpack. There is still a lot of confusion about what it is exactly, but nonetheless it seems to constantly accompany Abe and later appear inserted into the Mayan-looking device.