With the initial shock gone, it is time to tie some loose ends and speak a bit more about the trailer that we just saw.

This is probably the most interesting point. As pointed out by Reddit user /u/PlaceholderText, it is very likely, if not confirmed that Abe in fact does not lose his stitches.

“How can this be? We’ve seen it in the end of the cutscene!”

If that is your first thought, I don’t blame you because I fell into the same trap. However, watch this:

Do you see it? Or rather I should ask, do you see that you don’t see it? The ‘it’ being of course Abe’s chest scar. He is in fact missing it, but this alone obviously doesn’t mean anything.

Except – and once again, thanks to /u/PlaceholderText for being so observant – when he actually gains his chest scar, he still has them!

So even if he does cut his stitches, which I heavily doubt, considering it is part of the character’s identity and it was pretty much established before that the reason why he doesn’t remove them is not because of his inability to do so:

Q: I have always wondered why Abe never cut the stitches from his mouth? I mean I can understand in Abe’s Oddysee but after he got out of RuptureFarms why didn’t he get someone to give him the snip?

Alf: Abe says the stitches are both a reminder and a badge of honor. Me, I think he’s been hit in the head too much.

As detailed in yesterday’s post, I was quite confused by the fact that the Shaman narrating the trailer both looked and sounded very feminine.

The reason why this is surprising is the fact that females of superspecies (like Mudokons and Glukkons) on Oddworld usually look something like this: 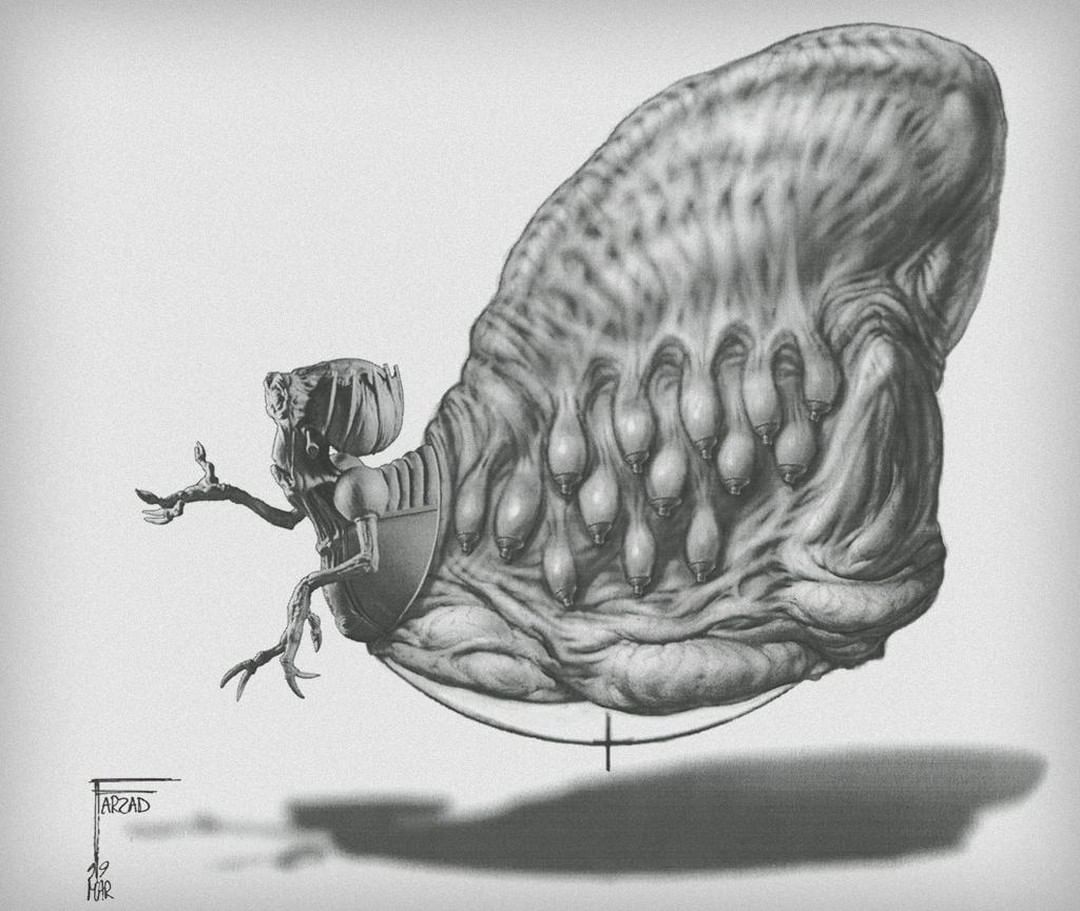 My guess at the time (which I nonetheless still consider plausible) is that the Shaman is in fact an infertile female Mudokon, who retained their “shape,” because of the lack of hormones and such.

However, others have since claimed, that it might be much simpler then that and the Shaman is in fact asexual, just like Abe and the other Worker-type Mudokons.

Neither theory has any decisive evidence that supports or refutes them, so I’ll leave it to your own interpretation.

And just when you think things can’t get any more confusing, it turns out there are two Shamans. One wearing a mask and the feminine one discussed above. We have actually seen this character before in a tech-demo:

If you compare the two, the differences are obvious. Different body shape, different clothes and jewelry, different tattoos and different backgrounds. It is pretty obvious that these are two different characters.

The current consensus is that Abe meets the first one very early (maybe even at the beginning of the game), while the later one will be met at the halfway mark or perhaps even later, but nothing is known for certain.

One more thought about the Insects

As Reddit user /u/zaxik points out, the insect symbolism is a bit surprising, considering Mudokons were established to be descended from birds (hence Abe explodes into a bunch of them when he dies and why you use Bird Portals to save Mudokons.)

Alf: It doesn’t make a whole heap of sense to use fancy words like that round these parts. Life on Oddworld evolved on Oddworld, quite separate from the categories you’re familiar with. Sure there are resemblances that you’ll recognize, but Mudokons can’t really be described as mammals. We did, after all, evolve from birds – hence our feathery hair. But Sam lays eggs, yeah.

So the fact that we’ve seen so many references towards bugs seems to imply a retcon of this. Or perhaps Mudokons are somehow both descended from birds and bees (which would be a pretty funny unintentional innuendo, when you consider the other meaning of “birds and bees”.)

An egg inside the sack?

Some seem to think that a Mudokon egg might be inside the glowing sack some of the characters have been holding before.

I am, however, not really into this theory, for one simple thing: Unless it was retconned, Mudokon eggs are massive and definitely don’t fit into pockets. 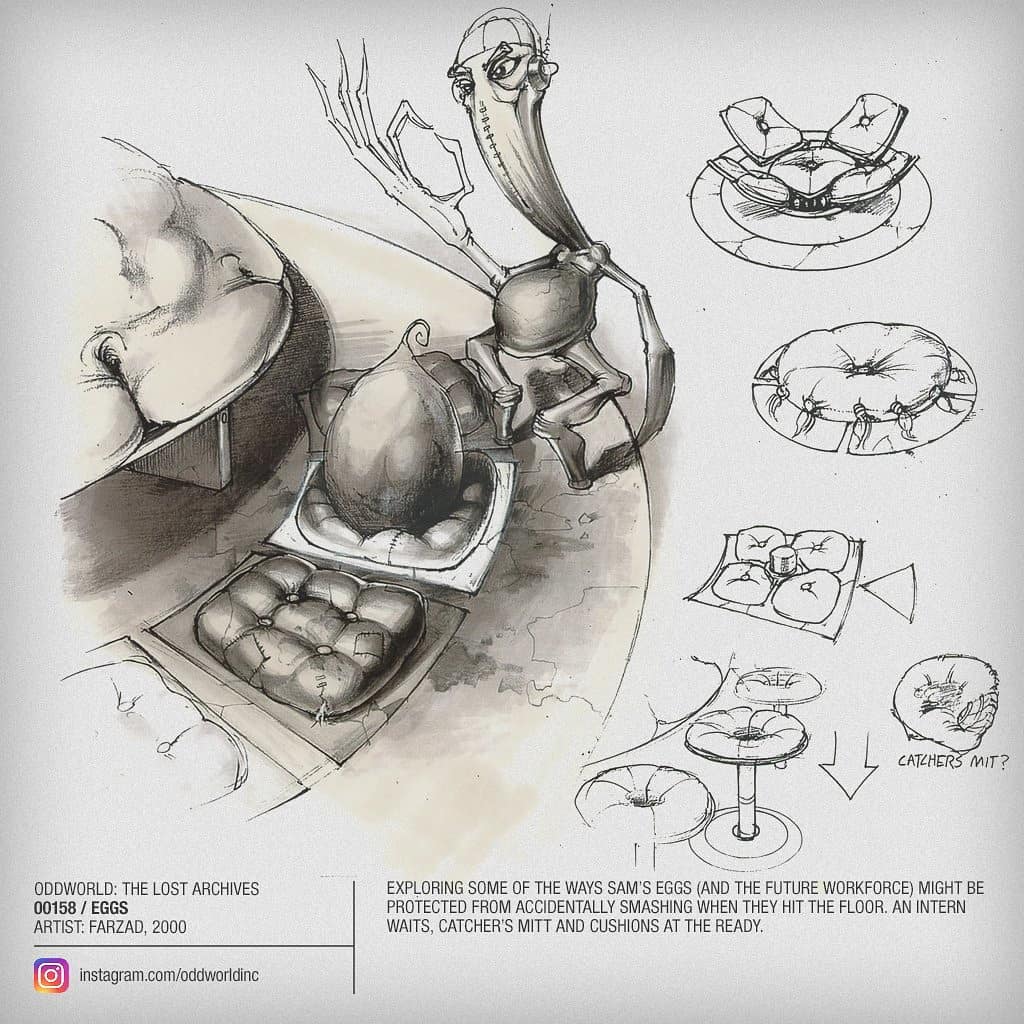 What I rather believe it to be, is whatever is inserted into the Mayan-looking device as it is more or less the same color, shape and size as the bag.

A few extra points of interest

As some others have already spotted, the monitor on the image below show seems to be displaying one of the broadcasts of Magog on the March.

Also on this picture Alf seems to have a lot more tattoos than we thought he did.

The following two images seem to happen right after each other, both the colors and the geometry seems to add up, along with of course Abe looking really sad. 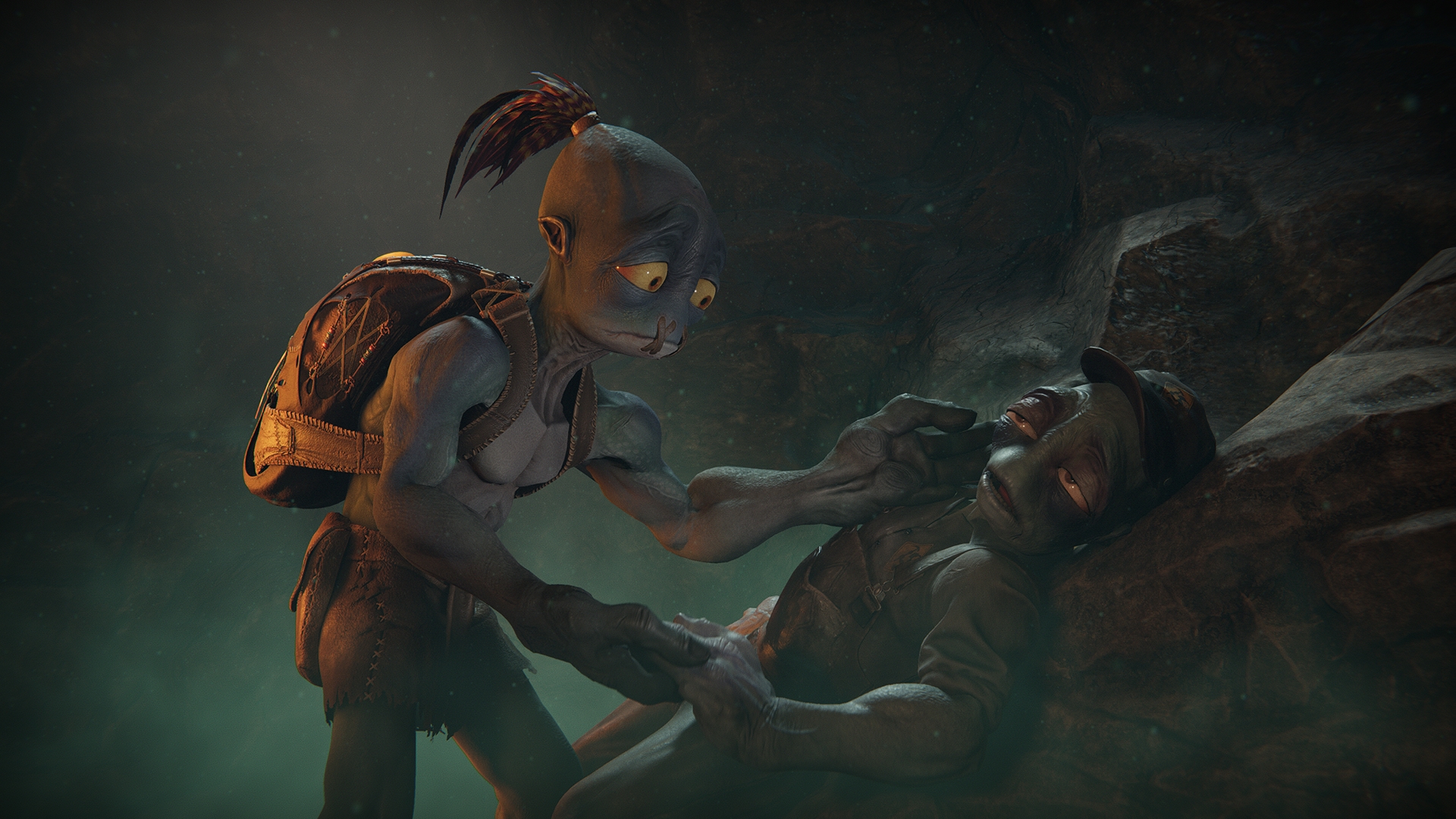 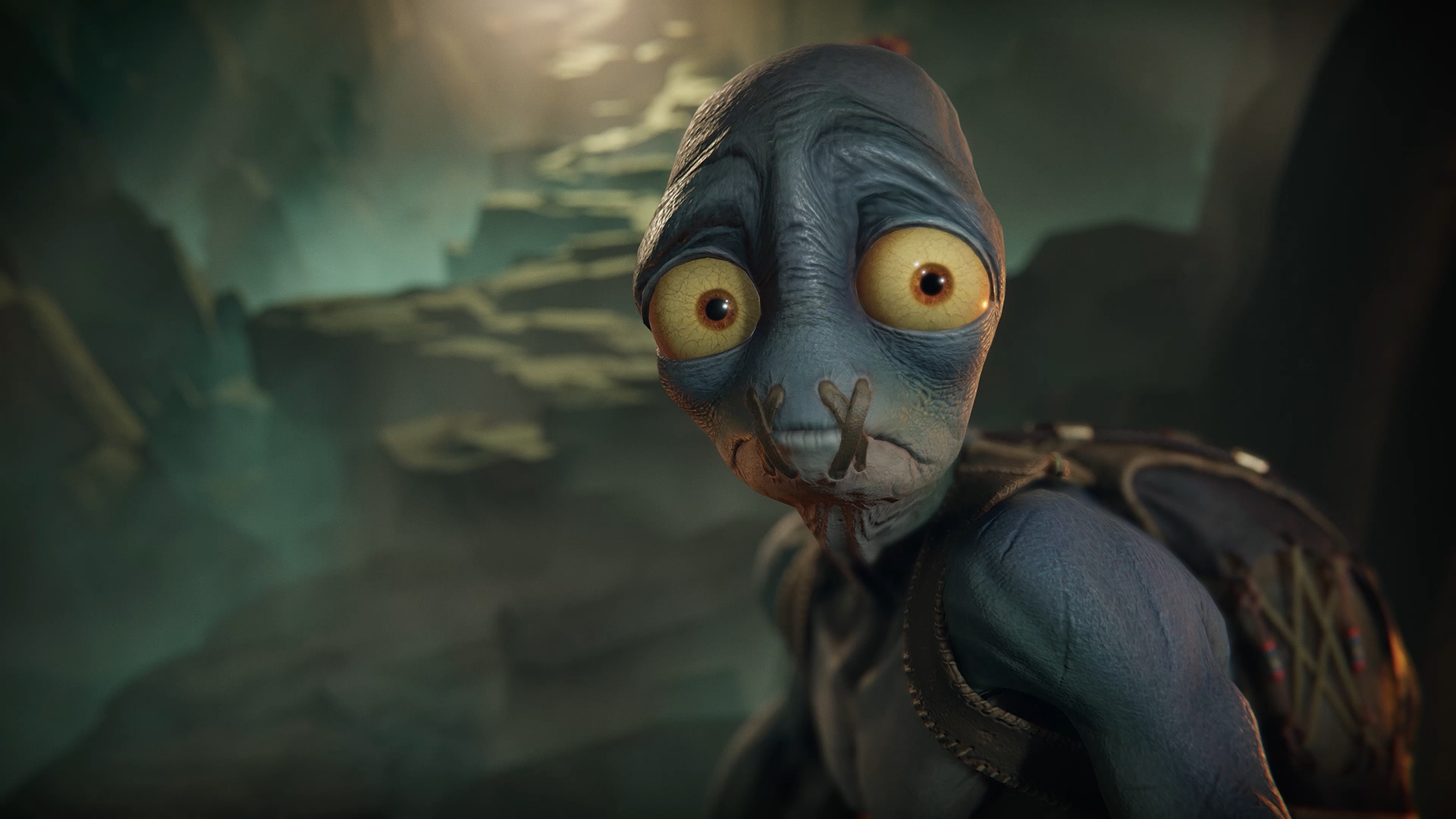 Also, this guy isn’t Toby after all, because this Mudokon is wearing a Necrum Mines hat and uniform, which also informs us of the location where this happens. Cancel the party lads.