My thoughts about ‘Molluck Returns’

A few days ago OWI released a new trailer during the PlayStation 5 price reveal event. While I already made a post at the time - which I recommend reading before continuing with this one, - I haven’t really touched upon the events that are in focus.

If you haven’t yet seen it, you can watch the video here:

Well, he’s back. Molluck is perhaps my favorite villain in the entire series due to the fact that he had a menacing presence despite the fact of hardly even appearing in the original game, so while I’m obviously happy to see him appear again, I’m a bit worried about his demeanor.

He’s extremely over the top. I’ve spoken with others who say this is understandable due to the fact that he just survived a lightning strike to the head and lost his entire reputation. I don’t disagree with them, I just feel like this is such a huge departure from the original “Molluck was cool,” that it’s almost like this is a different character now. Of course nothing is set in stone just yet, perhaps he was only so embellished for the trailer, all I’m saying is that to me this feels like a huge and disconnected jump in personality.

I think we found our new Newscaster Slig, with one line this guy is already the most sympathetic character in the game.

It is also interesting to see that Molluck is so direct with the guy, though I imagine now that he lost almost all his wealth he can’t afford to boss others around the same way.

So in my last post I wrote that I find it confusing the Mudokon hideout is in a desert considering the Monsaic Lines appears to be inside a jungle.

However, after a discussion I had with Insomniac Anvil, I’m fairly convinced that this is in fact that place and can’t be really anything else. To fix the desert issue, Anvil’s suggestion was that it might be an underground oasis of sorts, based on the light that shines from the top of the image. To me this doesn’t sound too far-fetched, so unless something else comes up I hold this a likely explanation.

He doesn’t say much interesting in this section, so I don’t have much to add either. The only thing I found hilarious was when he says the following:

Lorne Lanning: …and it’s all made possible by the power of PlayStation 5.

And yet at the end of the trailer you see this:

I like how this area looks, the rusted away machinery and rotting buildings provide a nice bit of atmosphere. The only thing I don’t like about it are these hanging rocks.

Others have criticized it for not looking realistic and while yeah sure, they don’t, to me there is something else that’s a lot more bugging. Namely, what’s the purpose of these rocks? If you spend a bit of time on TOGG and look at concept art, you’ll see that everything has a purpose, no matter how small. There are hung up rocks all around in the Scrabanian temple too, but they have ornaments on them making it obvious that these are either decorations or perhaps even objects of devotion. In comparison these hanging rocks are just that. A bunch of rocks hung up by unrealistically thin ropes.

Also there appears to be mines on the ledge above the Jelly. The video’s quality is too low to really tell, however, their general shape and color heavily reminds me of AO’s landmines.

The Security Orbs - which have actually grown quite gigantic compared to the previous games, - now have an animation where they “curl up” once deactivated. Many people complained that it was hard to tell just what the range of these were, perhaps this will help them and even if not, it’s a much nicer way of showing its status compared to the old way of turning the lamp in the middle on or off.

I found this scene curious for multiple reasons. One is that Mudokons leave Abe behind and seem to find their goal on their own, this hasn’t really happened in any of the older games. The other is the fact that there seems to be three ways, going left towards the working Mudokons, entering the door or going to the right with the open gate.

I wonder if the player is expected to escort the Mudokons, then come back to this area or if those Mudokons are free to be left to their own devices while you investigate the other paths.

As pointed out in the last post, the Necrum Mines Mudokon died from a gunshot wound. However, it is not him who I’d like to put in focus, rather the Orb, that Abe carries on his backpack. As seen on the screenshots and trailers OWI posted on their site, Abe doesn’t have the Orb embedded in his backpack before meeting the dying Mudokon. 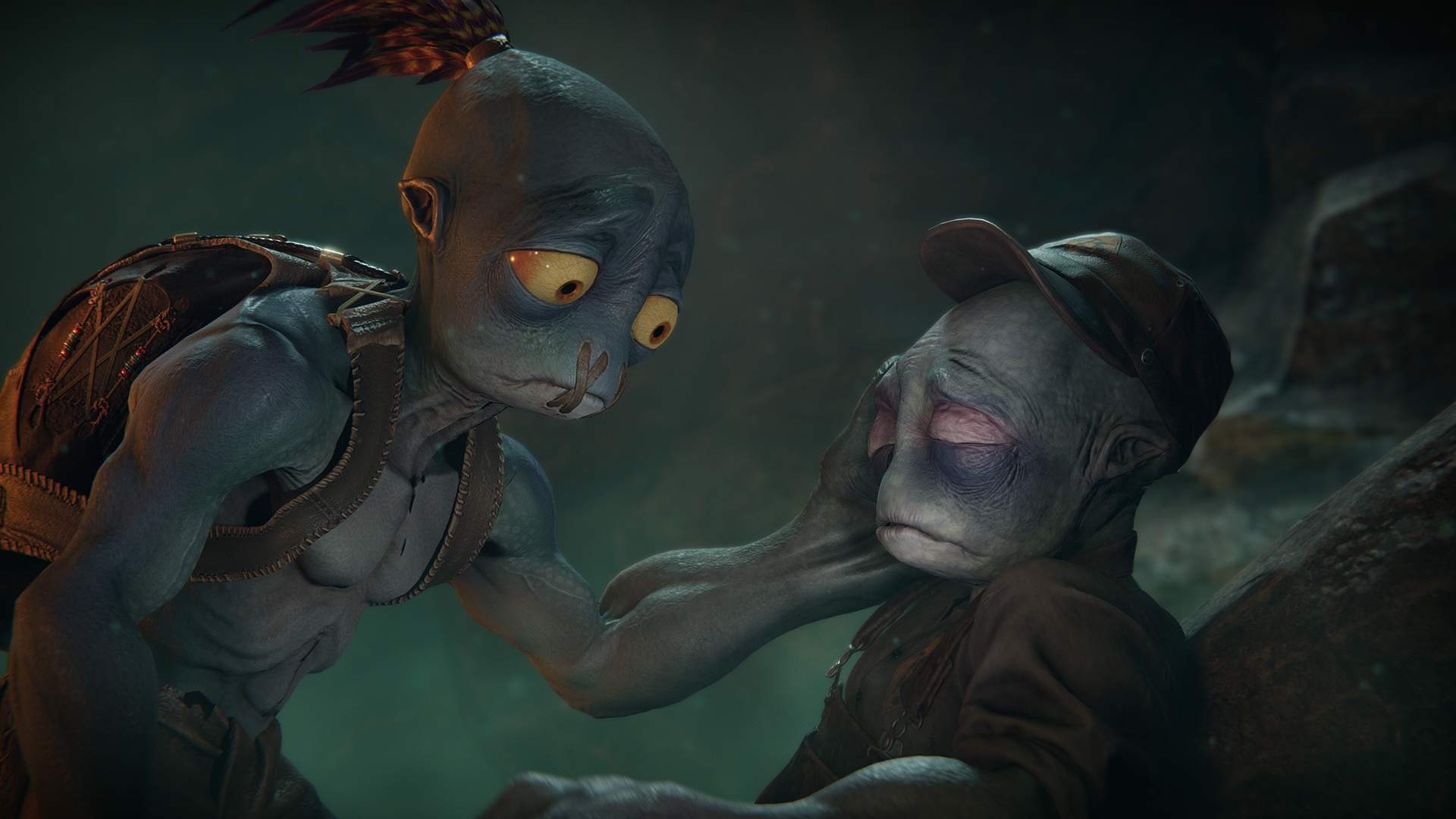 Most people - including me - thus thought that this is where he receives it. However, if you pay close attention to Abe’s backpack in the trailer, he has it even in areas that precede Necrum.

My only explanation to this is that they simply forgot to remove it from the model while demoing the game. Of course this also opens up the can of worms, that we’ve been entirely wrong about the plot’s progression, but due to the fact that we have very little to go on, I can’t really elaborate on this.

This one is interesting, I have ideas which place this could be, however, unlike everything before I’m way less sure about them. One of my guesses is that this could be the underbelly of Comet Depot. The colorscheme seems to match with a previous trailers’ and it makes sense that a huge warehouse needs a lot of power.

On the other hand, these furnaces look quite similar to the ones in Exoddus’ Bonewerkz, so perhaps this area is Soulstorm’s version of that?

What further complicates things is that they are also similar to the ones found in RuptureFarms are similar too. However, I don’t think this happens there as the machinery is still working even though RuptureFarms was shut down then burned down.

In the penultimate scene of the trailer we see Molluck’s blimp chase after Abe while firing rockets at him. Whether we’ll be able to fight back or not is yet to be seen.

Well I suppose the trailer was good at showcasing some other areas (finally we moved outside Comet), but it didn’t really elaborate on anything. Storywise we already knew Molluck is back. Gameplaywise we haven’t really seen anything new either.