The Schism: A Quick Timeline

While pondering about the lore, one may wonder, how did the whole slave-master relationship happen between the Glukkons and the Mudokons? It might seem plausible, that this was “always the case” or that this is not known, the real answer is far more interesting in my opinion.

It is said, that eons ago (remember Oddworld being ten times as big as Earth, evolves far slower) the Mudokons and the Glukkons lived together in relative harmony. They both practiced mysticism and nothing would have stopped this peace, except that one day a Mudokon paw appeared on the moon orbiting Oddworld.

For the Mudokons, this meant an absolute sign of supremacy. The paw was the sign of the Gods, telling everyone that they were the chosen species. But to the Glukkons, this was an absolute disaster. Not wanting to endure this kind of humiliation, they decided to turn to Alchemy with the intention to disprove the Mudokons’ claim. Then… something happened. The details were never disclosed, but Lanning described it as a “disaster”, which nearly drove them to extinction. This combined with their incapability to challenge the Mudokons’ beliefs drove the grief-stricken Glukkons underground, who swore never to look at the moon again.

Thus began the Age of Science. Throwing religion aside, the Glukkons instead began experimenting and inventing technology. This made them very powerful compared to the Mudokons, who at the time lived as spiritual advisors to other speices. Sadly, because their old hate never faded, instead of letting go of the past, the Glukkons had no problems with exploiting and enslaving the creatures they once called their friends.

It’s quite a tragic story and I believe with this in mind you can’t really say that “Mudokons are Good” and “Glukkons are Evil”, because neither party is innocent.

There is, however, a problem. The canon actually branches in two ways and one of these branches makes this whole event simply not possible. Lanning has once said, that they originally intended that when Abe escaped from RuptureFarms, there would have been a huge meteor shower, which would have slowly carved out the paw, while our hero navigated the Stockyards. While it would have been an amazing sight to see, it would have also removed the reason for the Schism to happen in the fist place, hereby rendering the entire story impossible. Despite this branch being an interesting piece of trivia, I think it’s not a stretch to consider this just a “what-if” version of the lore and instead consider the other one the “true” canonical events.

Until this point, I mainly dealt with facts1, but why not speculate a bit? While it is mentioned, that the Glukkons gave up on mysticism, this doesn’t actually seem to be the whole truth2, especially with the recent promotional material of Soulstorm3. Not only are there multiple pieces of concept art(4,5) depicting Industrialist priests, but as the interview states occultism shares a major part in giving the Glukkons such power and influence. 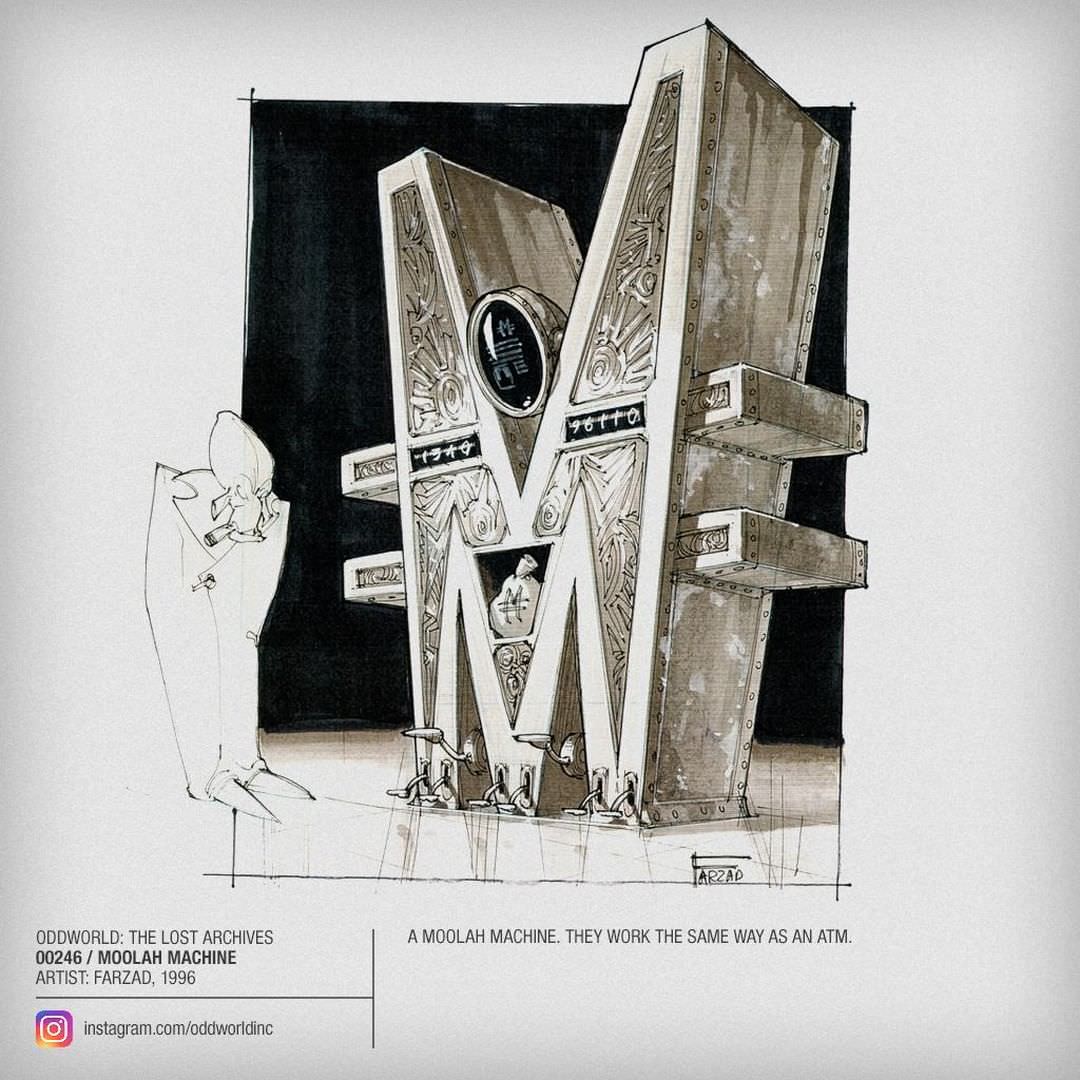 I believe what they worship is in fact money itself (or more specifically Moolah), whose power manifests in a similar way to the Mudokons’ Chi. In the previous games Abe only fought relatively small fishes, neither Molluck, nor the Glukkon triumvirate or the Brewmaster could be considered even relatively powerful, so we haven’t yet seen anything from when Glukkons - feeling threatened by Abe’s seemingly unstoppable march - stop using Sligs and instead call upon the wrath of their “god”.

The specifics of this is of course up to everyone’s imagination, but if the Mudokons can call down a natural disaster - like the thunderstorm that destroyed RuptureFarms -, them wouldn’t it be fitting if the Glukkons utilized the pinnacle of artificial destruction, the perfect avatar of the cruel, immoral and power-hungry nature of them: A giant nuclear bomb.

Other posts in the Essay category: