Two days after the first E3 interview, we got to see a much longer segment of Oddworld: Soulstorm. The video contains most of the scenes we saw in the previous trailer, so I would rather focus on things that we haven’t seen previously. In case you’re out of the loop, you can read my previous writeup here.

As I’ve previously theorized, Abe really does arrive using that train to the level.

“Are we rushing in? Or are we going sneaky-beaky like?”

We get to see more of the UI in the form of help-bubbles and a screen explaining the mission objective to us. 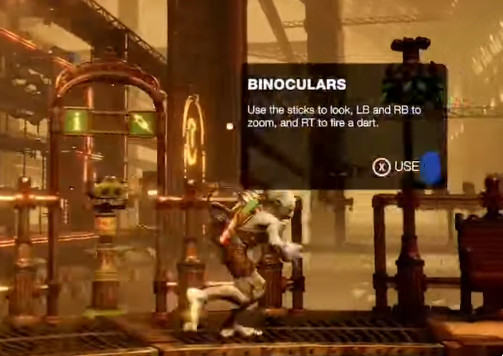 Abe runs past a pair of binoculars. The help-text explains, that it can be used to survey the rest of the level and to shoot darts. As seen previously, these darts can be used to knock out Sligs. I’m not a hundred percent sure whether this is lethal or non-lethal, but personally I’m inclined to think it won’t kill them. 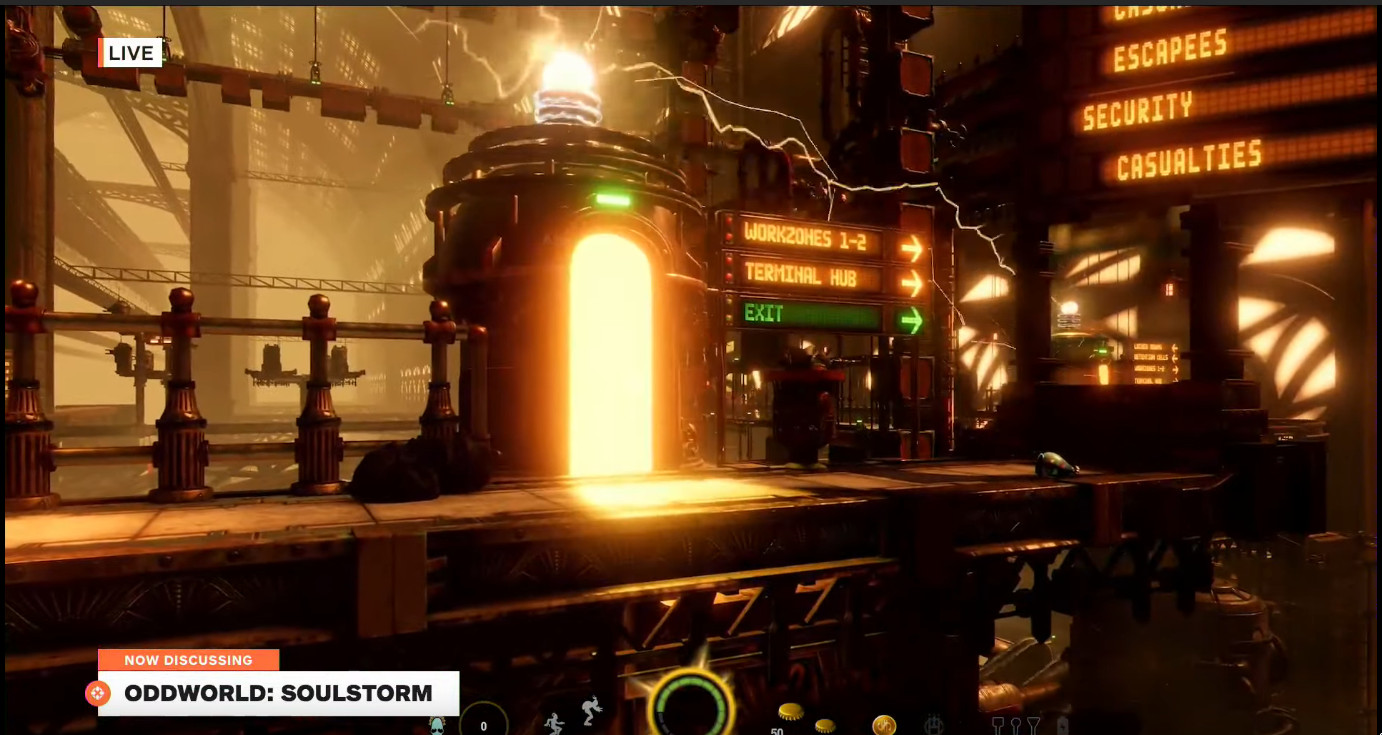 Since levels now have multiple levels of depth, doors were reimagined to be short-distance teleporters, that beam Abe from one place to another using lightning bolts.

A mural showing a Mudokon carrying a huge cog on his shoulders. This image is very similar to the titan Atlas from Greek-mythology. 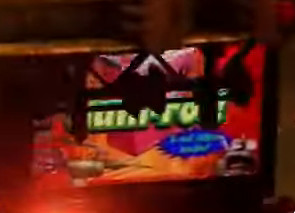 Right after Abe leaves the teleporter-door, we see a familiar old poster advertising Gum Rot. The poster also has a Fuzzle on it, which likely means that they’re still canon and perhaps even part of the game. 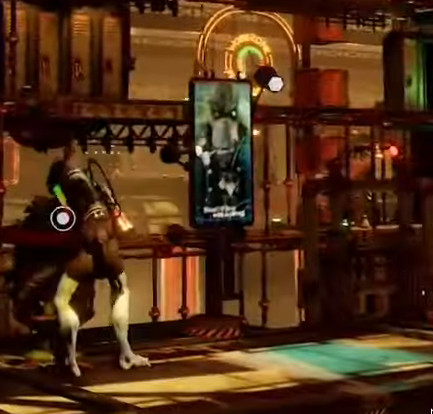 Even through he’s just a placeholder, you surely won’t scroll any further without first cherishing General Dripik.

To visually convey Mudokons joining Abe, they now have little yellow hardhats, that they throw away, when Abe calls to them.

The new Gamespeak appears to have two calls (there might be more, but this footage only showed two) a green call and a red one. The green is basically a combination of “All of you!” and “Follow me!”, while the red one is “Wait!”. 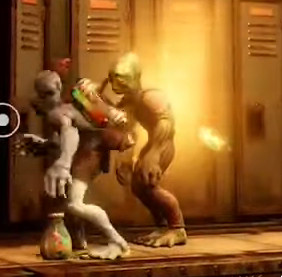 Abe calls to the Mudokon and we can see a small yellow shine appear and fly into him. This is how Quarma is represented now. Later we’ll see how negative Quarma looks like. 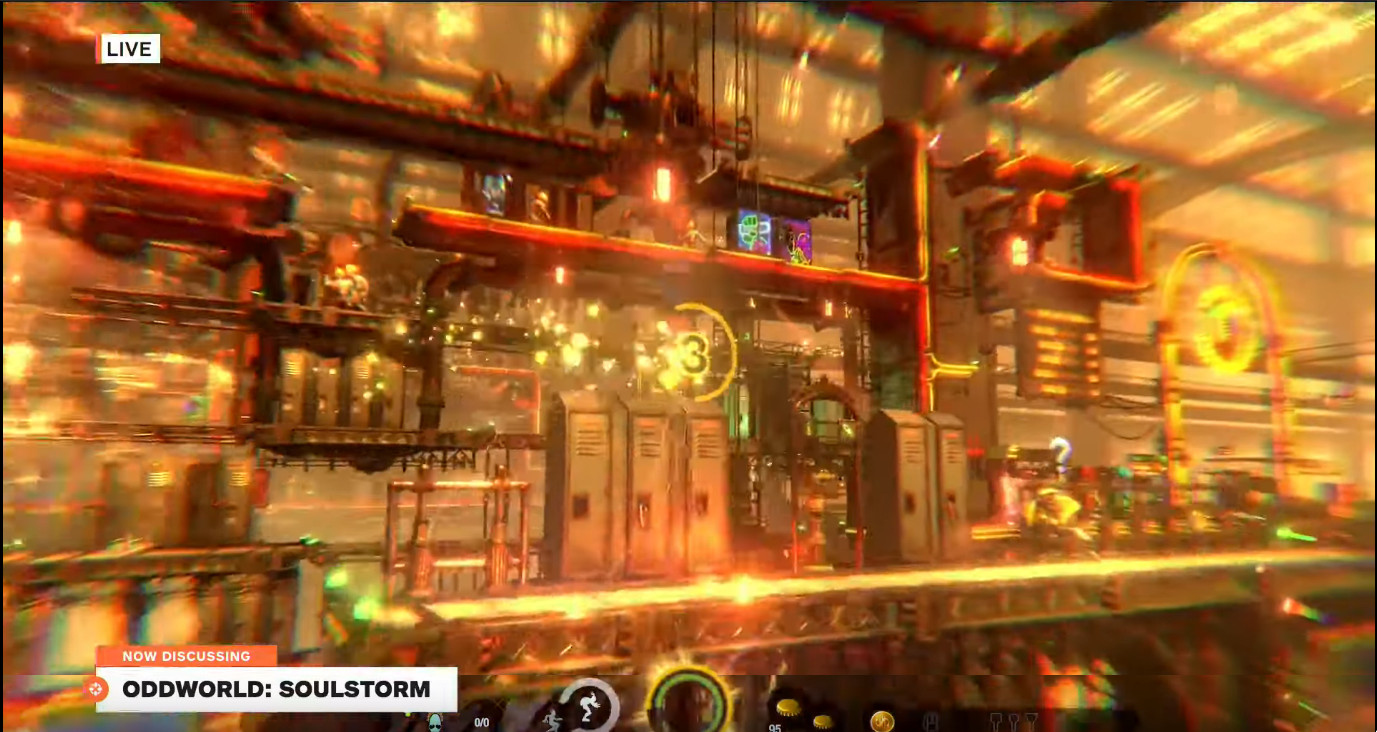 The screen visibly blurs as the orb leaves Abe and there is a noticeable color-shift.

We then get to see possession. I have to say, my opinion about it is mixed. While the graphical effect beats miles on New ‘n’ Tasty’s “Mandala”, it’s still far less iconic compared to Oddysee’s and Exoddus’ blue spirit balls. I especially dislike the possession orb, which looks way out of the place and when it possesses the unfortunate Slig, it doesn’t even look like it’s “invading the mind” or something, rather just makes a quick lap around it and it’s done. 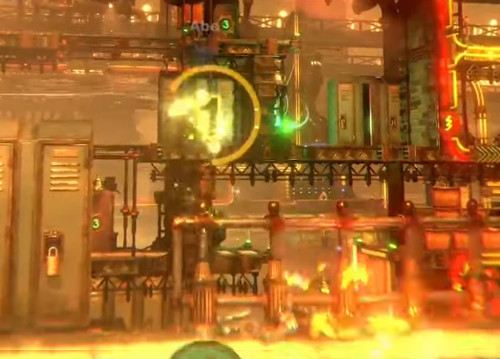 As the Slig gets unpossessed, the orb is once again controllable, albeit only for a very short time. As Lanning explained, it will be possible to “chain-possess” multiple Sligs.

Possession is now time limited. I’m not sure whether I like this or not yet, so I’m reserving judgement. Also as the devs explained previously, you may have the choice to either gib or just knock out your target.

Pistons serve as an environmental hazard in this puzzle. Jump at the wrong time and you’re toast. 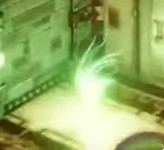 Abe picks up a “Royal Jelly”. For those who might not know, Royal Jelly in real life is a kind of substance bees and other hive-creatures feed to those larvae, who are destined to be queens. This causes changes in their bodies and makes reproduction possible.

However, as we can see here it just increases Abe’s max health. Even so, I’m curious about the implications. As we know there is at least one Mudokon queen, Sam, who is held captive by the Vykkers and Glukkons. Maybe Abe is collecting this for her or to create a new queen?

The player uses a jawbreaker enveloped in rubber bands to knock out a Slig, who’s holding a lever, not letting him proceed. The non-lethal take down nets Abe one Quarma. 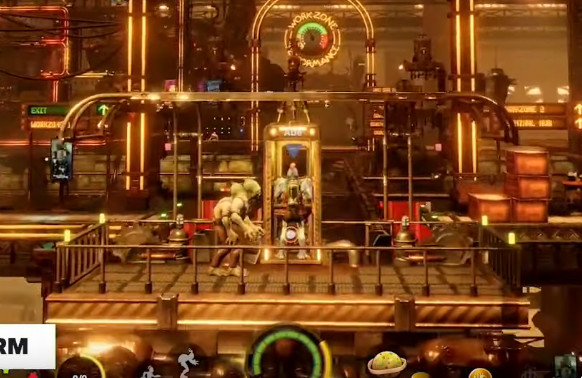 Abe and his Muds board a “Content Delivery System”, which lets them travel between layers of the map. 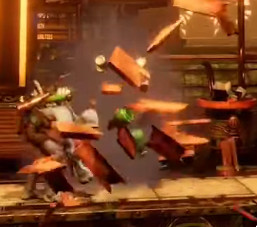 As they arrive at the next layer, we can observe Abe breaking some boxes by striking them with his hands. Perhaps in a time of great need melee is an option too?

Abe murders a Slig in cold blood by using possession, netting him a large sum of negative Quarma. This ain’t Exoddus anymore, killing Sligs is now undesirable. Unless, of course, if you want to achieve the bad ending. 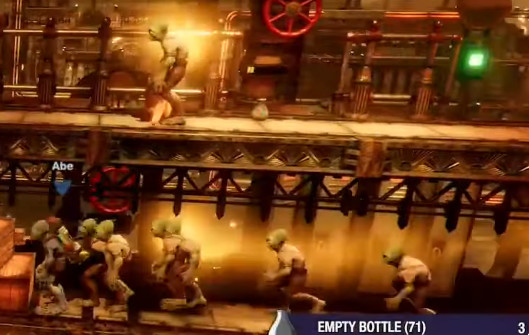 The gang’s all here!

Abe calls a large number of Mudokons to himself, who leave their workplaces. The alarm immediately goes to Medium, which means that the guard posts will start spewing out Sligs. 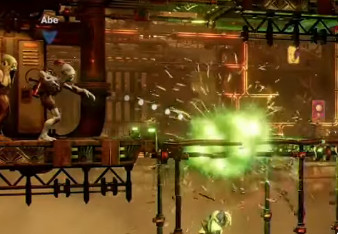 By throwing multiple “Fizzy PoPs” the player can destroy fragile floors and walls, without starting a fire. And it can also make for a stylish entrance. 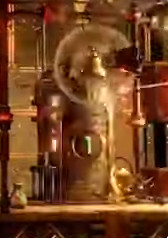 “This was a terrible idea!” 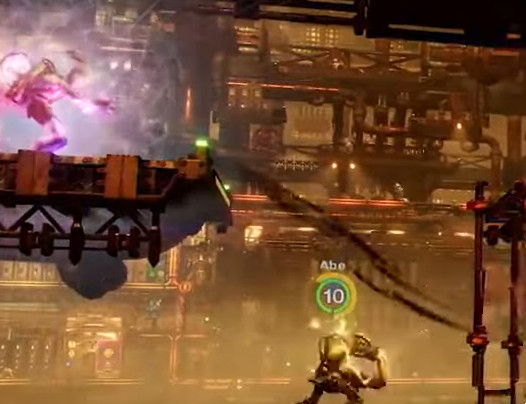 Your actions have repercussions…

A Slig gets possessed and by triggering the little bell above the guard post, another Slig is spawned, who is then perforated. This results in a huge hit of negative Quarma, which is represented by many black blotches flying into Abe. 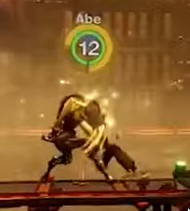 Instead of being jerked back, Sligs now have to reload between firefights.

Abe continues his rampage using the Slig, until he is dispatched. Afterwards he crafts a flamethrower, whose recipe has changed since EGX 2017. 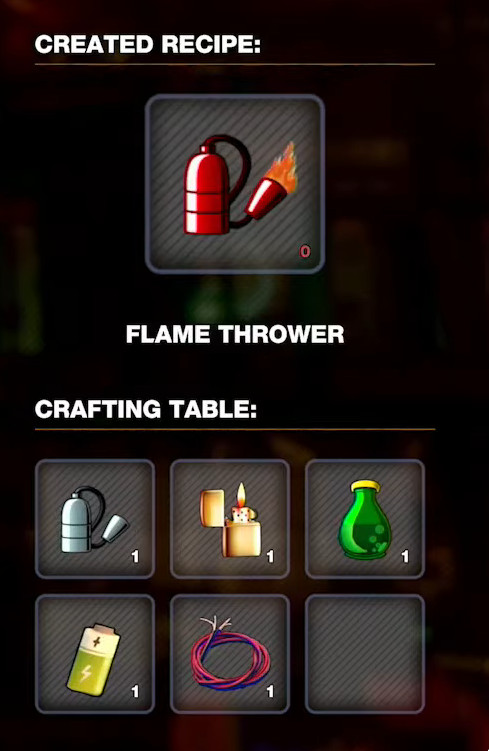 It’s original recipe was a bottle of SoulStorm Brew + an extinguisher + a lighter.

With the flamethrower, he kills many Sligs. Amusingly, death by fire only gives Abe 7 negative Quarma. 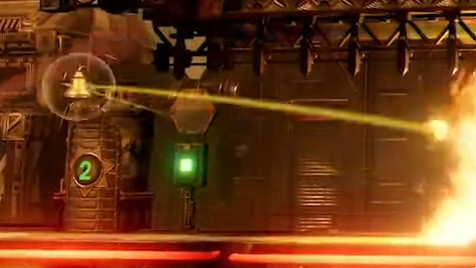 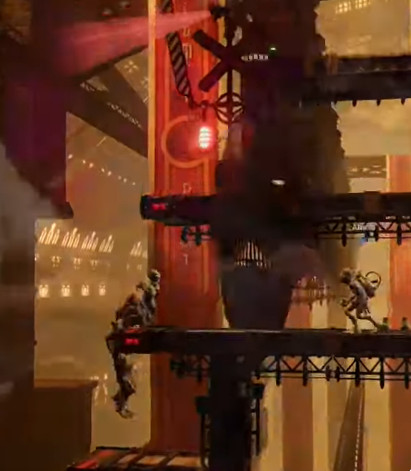 In the final scene we see Abe and the Mudokons trying to avoid a train flying past them, however, they fail. But before we could see them being gibbed, the camera fades to show Lorne Lanning and the interviewer again.