Some pieces of trivia about the locations Abe visits

On this page I share some of my thought about a handful of locations we visit in Abe’s Exoddus. Sadly the game itself doesn’t really do them justice, as we only see the end of them and this we hardly get to know what’s their purpose or intricacies. The quoted parts - like usually - are from “The Art of Oddworld Inhabitants: The First 10 Years”.

Unusually, this place has no head-Glukkon, the only owner mentioned is the mysterious “SoulStorm Mining Co.”. However, I believe that either this company is owned by the Glukkon-trio of Dripik, Aslik and Phleg or just Phleg alone. The former is supported in an old article where it is said that Molluck entrusted this trio with running the Brewery, while he was forced to hide. The latter is just my own thinking: Since Phleg owns Bonewerkz, the place where bone powder is stored, it would make the most sense that he owns the place where the bones are “produced” too.

“Adding insult to injury, blinded Mudokons are forced to dig the bones from their own ancestral buiral grounds. The Glukkons are so greedy that the Mudokons are forced to work without sight for fear that it would lower their productivity if they found out that they had been exploiting their own burial grounds. This concept was spurred from real-world historical accounts of using native people, whether willfully or unwittingly, to undermine and destroy the record and culture of their way of life. The skin of Blind Mudkons is paler than Abe’s.”

I always found it weird how when Abe escapes from the Mines he ends up in a jungle. After all, the introductory cutscene talks about how they have been travelling in a desert for the entire day and there is not a single tree in sight when Abe and his friends enter the burial grounds. This is where the Artbook comes handy as it has a paragraph detailing how the Necrum jungle is in fact an oasis in the middle of a desert, surrounded by a sacrophagus like structure. The book also notes, that since the Glukkons have infiltrated the place, the oasis began dying and crumbling away, which I suspect is intended to be a metaphor for the disappearance of old cultures because of greed and ignorance.

“Necrum is the vast burial ground for many Mudokons. It is an oasis in the desert sorrounded and protected by a giant stone structure reminiscent of a sacrophagus. It served as sacred final resting place for Mudokons long before Glukkons and Sligs arrived to exploit its contents. As Necrum was desecrated by the Glukkons and the bones of the Mudokon ancestors were stolen to create SoulStorm Brew, life itself was drained from the once thriving oasis. The air became arid and hot with the encroaching desert on its walls. All that remains is decayed, crumbling rock and the sparse wilted remnant of a once healthy junge. Early design influences were Mayan architecture and some of the structures from the Paris catacombs. Later rock spires, reminiscent of bone or worm eaten wood, were added.”

It is quite interesting that it seems spirits are only able to manifest in Necrum, as the text states, that the Weirdos are missing those limbs whose bones are taken out of the oasis. Also, this text confirms that Fleeches are in fact indigenous creatures. It is said the Vykkers genetically engineered these creatures to be the perfect pets for Glukkons, but for a long time I interpreted this as that they actually made them from scratch.

“The Three Weirdos are spirits that call upon Abe to stop the Glukkons. They are already missing limbs due to the removal of their bones from Necrum. They are covered in Mudokon ceremonial paint and headdresses. The headdresses are symbolic of the wildlife that lives on Oddworld. Made from natural tulle fiber and river ploshed gems the Paramite, Scrab and Fleech are all part of the ceremonial themes assigned to each of the Weirdos.”

These are likely to be the most known information on this page, but FeeCo is actually a word-play on the word “fecal”. Also there is a poster with the following text: “Uncle Aslik / Keeping the trains running on time”. This is a reference to Mussolini, who was also referred to this way. 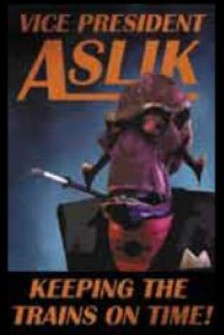 It is interesting that Aslik is mentioned to be FeeCo’s Vice-President here. In other texts, like “I, Aslik”, he is referred to as SoulStorm Brewery’s VP.

“Feeco Depot’s name caused a chuckle when Inhabitants realized thatt it was possible to combine the word ‘fee’ and the word ‘company’ and create Feeco, which sounds remarkably similar to fecal. It was a triumphant moment in potty-humor history. Fitting that the vice president of Feeco Depot was named Aslik.”

The book also contains a paragraph on the trains Abe boards to get from one place to another.

“We like to think of all machines and architecture as a portion of the character that builds them. The first question we ask ourselves is who built this object and what was their motivation. The Glukkon mindest is that at any cost, his wealth and its effects are a tribute to himself. Glukkons posses a massive appetite for fuel and raw resources and their design reflects it. Their objects and environments, if at all possible are always over-built and extravagant. They belch fumes and smoke and show no regard for the effects on the environment and its Inhabitants. Given the choice, a Glukkon would always choose a giant all-burning beast over something more efficient. Why? Because they can. The train and Feeco Depot are good example of the production design phylosophy that this object represents a character. Its piercing scowl, tethered by a smoke-belching abdomen, and its centipede leg-powered drive rail all show attempts to add character to something that could have easily been a simple transportation solution.” 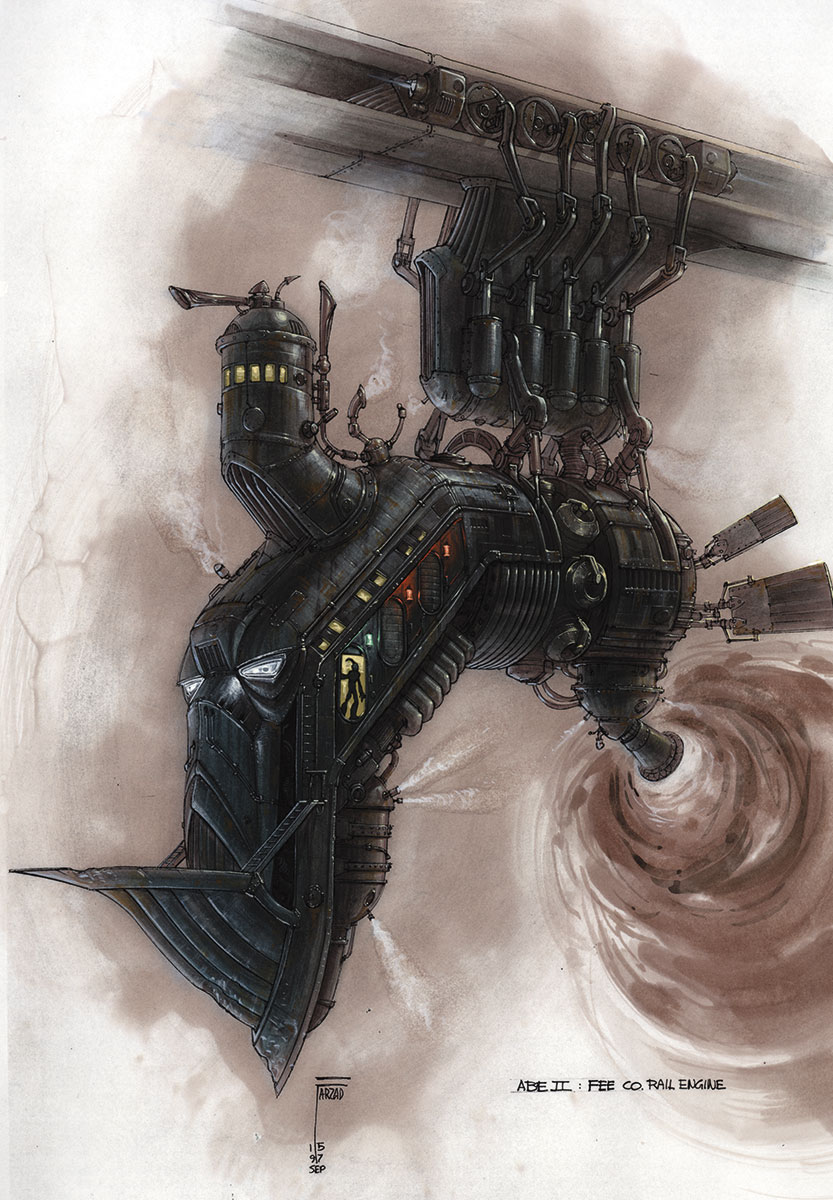 If you think about it, Dripik’s role is never really explained in the whole Brew-deal. Sure he has Sligs, but as the excerpt states, the location itself isn’t used for pretty much anything. Phleg and Aslik basically fulfill all tasks necessary for excavating and processing bones, so our favorite buffon General really has no reason to be around. Through, I’m glad he was finally included, as this area was always my favorite in Abe’s Exoddus, the aestethics of it were absolutely captivating and seeing those tents go as far as your eyes can see were a really enchanting sight for me when I was younger.

“The Slig Barracks has never once been used in a real military conflict, but has been built up by the cowardly and self-important General Dripik. The Barracks reflect his own need for power and have been built up for years in a haphazard way, temprorary structure piled atop temporary structure. Everything has an over the top military feel-utilitarian, stripped down with no subtlety whatsoever. The visual “feel” for the Slig Barracks is a cross between a WW1 trench encampment and the Berlin Wall. Sandbags, barbed wire, sharpeend poles, Slig Lockers, tents, all can be found here in the barracks.”

This place is the main bone-powder storage facility. When I was a child I always wondered, why the Glukkons feel like they’re out of the stuff, if it lies in huge heaps at the bottom of the facility. The Artbook has an answer to this: Those piles are actually just useless slag. You have to wonder how much bone was actually processed there that just the byproduct almost fills the bottom half of the facility.

“Once the Mudokon bones are harvested from Necrum, trains bring them to Bonewerkz, the main storage facility for bone powder used by SoulStorm Brewery. Brick columns support a massive hangar-like structure filled with slag heaps from bone powder.”