A few interesting things cut from the games

On this page I’m collecting interesting facts from the canon that I found, that don’t really belong anywhere else. The texts between quotation marks and in Italics are directly quoted from Oddworld’s first artbook, The Art of Oddworld Inhabitants: The First 10 Year 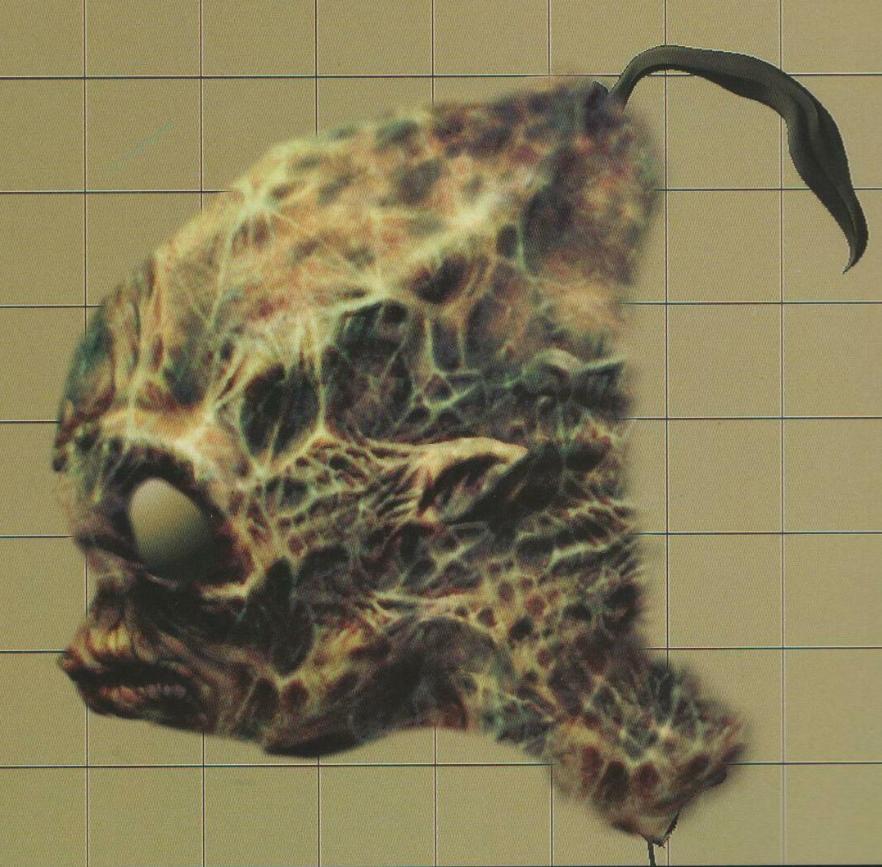 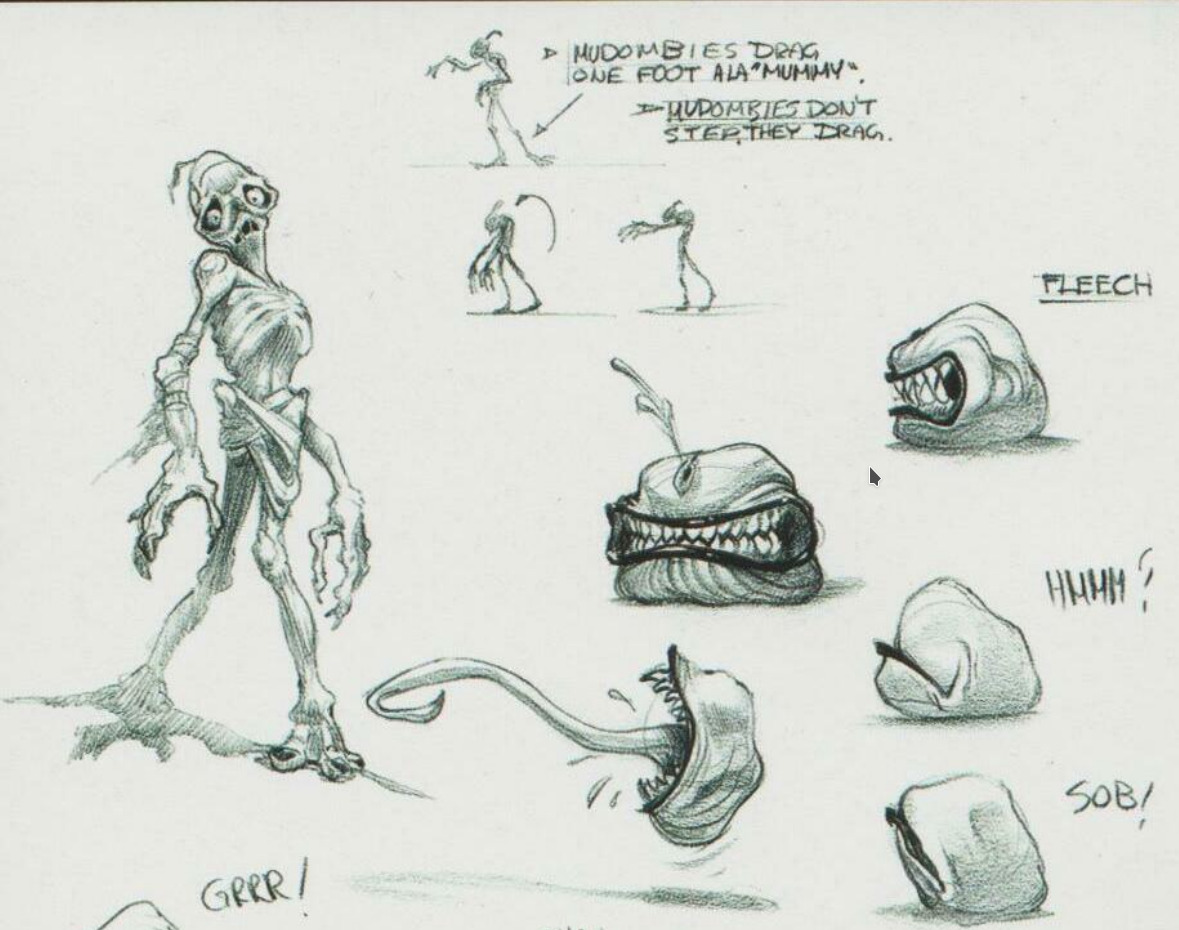 Also older variants of the Fleeches, they resemble furless Fuzzles.

Abe’s Exoddus would have originally featured zombified Mudokons, whom Abe would have needed to lead to their resting place. Presumably we would have encountered them in the jungles of Necrum or in the Vaults. My guess as for why they were cut is that presumably they wouldn’t have been too different compared to ‘normal’ Mudokons and the disk space was scarce.

Mudombies are Mudokon Spirits who cannot rest because their beloved burial grounds of Necrum are being strip-mined by the Glukkons. In a nutshell, they are hulking, idiot, zombie Mudokons.”

The concept was later used in another ultimately cut gameplay feature, where Abe would have slowly became a Mudombie himself, after sustaining enough damage.

If you rescued all 300 Mudokons, Abe would have had the chance to venture back into the ruins of RuptureFarms to rescue the Elum and then they would have made a big escape from the still-smouldering facility. 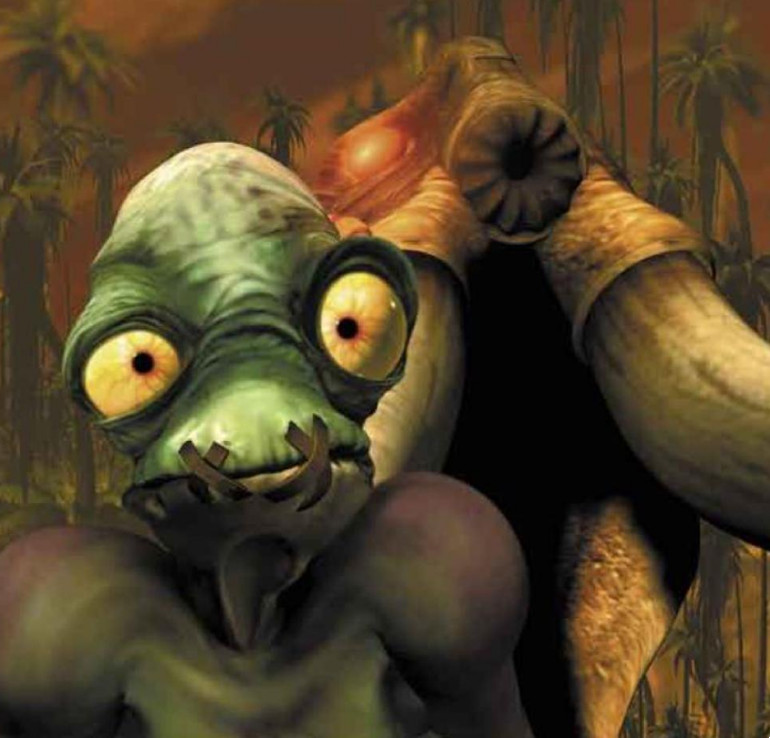 Despite their ability, that orifice has a very unfortunate appearance.

Not strictly cut, as they do appear in the final product, but their purpose is never explained in-game. The artbook writes about them the following:

“Abe lands upon the remains of a Necrum guardian. Guardians are remnants of ancient protectors. Long before the Glukkons ever knew about Necrum, the guardians were its sentinels, protectors of the sacred place and the Mudokons buried there. When alive these guardians had the unique ability of spitting fiery globbers of vengeance from the orifice between their horns.”

At one point in development, back when MO was still planned to be a much more grandious game, it was planned that each character you meet would have a certain social status, which you could manipulate. Lanning explains it through the example of a Slig:

Basically if you possess a Slig who is “nobody” (that is he has cheap equipment), no one will take him seriously and certain areas won’t open up to you, until you manage to upgrade your possessed character’s status. If you were to approach a group of Sligs and tell them to follow you, they would just laugh and tell you to sod off. But if you tried again, this time wearing the coolest gear a Slig can dream of, they would do anything for you without a word.

Also characters would have spoken to each other differently. The GameSpeak would still have just one button for “Greetings”, but your character would have said different things to different characters. The aforementioned Slig for example would have just simply yelled at a Mudokon when you pressed the button, but if you encountered a Glukkon, your Slig would have immediately became as polite as they possibly can. This entire feature was sadly cut from the game.

While the basic concept is mostly unchanged, Lulu was supposed to go through a much more exciting path to become a Glockstar. Munch and Abe would have had a lot more to directly do with him, unlike in the finished game where he is possessed once and that’s it.

He would have been a lowly Pud (the ‘rank’ of the least successful Glukkons) in a small meat packing factory, where his boss, a Glukkon named Sask, would have threatened him that if he doesn’t do his job and slaughter a few Scrabs for their meat, he would be fired.

From this point, it’s your job to make the best of the situation. You could have either done it as you were asked and butcher the animals, which would have resulted in negative Quarma. Or you could have chosen a similarly brutal (albeit for some reason more positive) way of dealing with the problem and murder a bunch of unsuspecting Sligs who were having a picnic nearby for their meat. This way you would have also made some scrap metal which would have made Lulu’s boss very happy.

By doing enough errands in Lulu’s name, he would have quickly been promoted to the top and as a Glockstar, he would have gained access to Vykkers Labs and by exploiting him Abe and Munch could have got Sam (by the original plans, we would have met the Mudokon queen in this game) and the Gabbiar out safely.

Another really ambitious idea was that Abe was supposed to be able to direct entire factories by possessing their leading Glukkons. This way you could have affected the Industrialists on a major scale. Also the terrain around you would have been dynamic and your choices could have changed them into becoming healthier or more polluted. 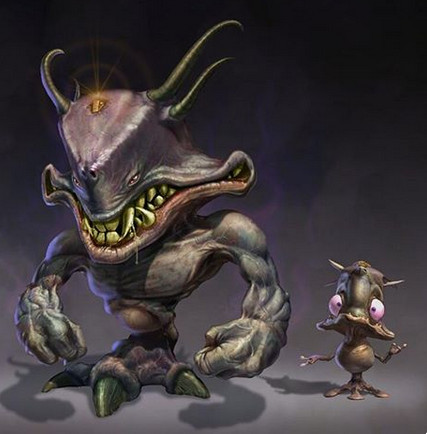 One might notice that Munch and Abe become friends incredibly quickly and without any fanfare in Munch’s Oddysee. Originally this would have been largely different.

One of the first designs of Munch was a tapeworm, that Abe regurgiated any time he needed him. This was quickly scrapped and replaced with something more akin to what we got in the final version, but it would have been lot less about the duo cooperating and more about Abe carrying Munch around on a wheelchair, with him having no word about where they should go.

Also at one point it was planned that Munch, after all the experiments that had been done on him by the Vykkers, would have developed a kind of Mr. Hyde like personality, which would have manifested as a mindless, hulking, muscle-bound beast called Roid. And the ‘best’ part is to call upon this creature Abe would have had to punch and beat Munch until he went mental.

You can read more about this aspect of Munch in this excerpt from The Art of Oddworld: The First 10 years:

“Munch’s initial idea was an exciting one as he was to have a Dr. Jekyll and Mr. Hyde type quality about him. He was to begin as a creature that was the sole survivor of his species. But he was being held captive as a laboratory-testing subject, and was being experimented upon with adrenal steroids. His plight was to escape the laboratories of this horrific processed food / pharmaceutical research facility and in the process instigate the return of his species.

He was a twerpy and somewhat pathetic looking little guy with a big heart and the face only a mother could love - at least on the surface. At the time, we were aiming to create meaningful (gameplay valid) emotions in a game character and we wanted to use an emotional dynamic to trigger the transformation into his Hyde-like alter ego.

If he were angered in the game experience, his emotional state was intended to trigger a metamorphosis into this huge and gruesome alter ego - who would be called Roid. Roid would be similar to the Hulk in that he would have a limited time to be this incredibly super strong b adass with bone crunching physical abilities. A complete flip from his normal self. The idea was to create this extreme yin & yang trait for a new hero.

Then reality hit as the land of gamedom is constantly faced with technological challenges. It wasn’t long before we found ourselves to be in too deep. We were too ambitious on this idea and didn’t really have the chops or the resources at the time to pull it off as it was originally conceived. A huge lesson learned.

The rest of the production was a process that could be referred as “reactionary design”. It’s what happens when an idea isn’t able to manifest well, but production is already under way, and the only solution left is to figure out how to get something viable completed. In many cases, the “reactionary design” process is standard par for the game industry, as this is an incredibly challenging medium to execute well. In the end, the collision with reality changed the story drastically and also shaped the game into what it was when it released with the Xbox. It was an award-winning game, but Munch wound up being himself, and his darker Hyde-side never manifested for the gamer to play.”